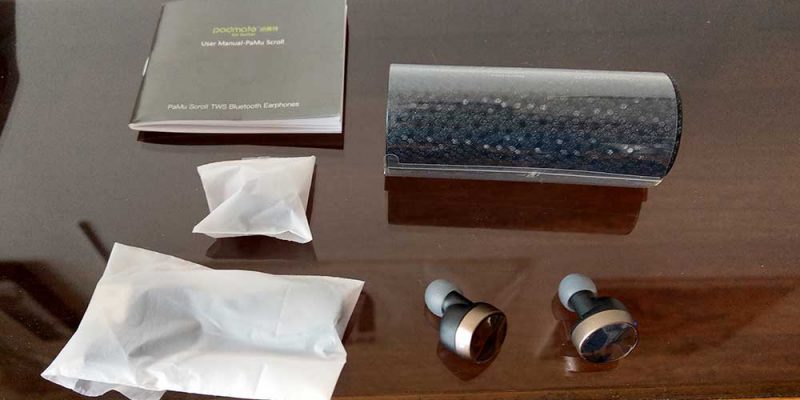 Certainly more than someone have seen the publicity and reviews of Padmate’s Pamu Scrolls being posted on social and YouTube in recent months. In some videos the “Airpods killer” were defined, as quality and market positioning are practically equal. As for the design, they will not be as minimal and ergonomic as those produced by Apple, but they are elegant at the same time, compact and light (they weigh only 5 g).

An element of distinction is represented by the housing – powerbank, in fact it is cylindrical in shape, is covered in leather with various colors, I preferred the Graphene(Black).

The PaMu Scrolls are wireless in ear earphones, a feature that on the one hand ensures greater isolation from external noise, on the other it may not meet the majority preference. In any case, the Padmate inserts rubber pads of three sizes into the package, in my opinion those with a small ear canal will find many difficulties in finding the most suitable size. However you can find trivially the same rubber pads in old earphones or on the internet. Probably this choice was made to maintain a stronger hold during sports and during daily hectic activities. As far as I am concerned I have not found any problems in this sense, I have never fallen.

The controls are touch. A touch starts or pauses the music or answers phone calls, while two touches jump to the next track, activate the voice assistant or refuse an incoming call.

While to use them in mono mode, then with just one earpiece, you can only use the right one which called the “master” (contains the Bluetooth 5.0 antenna). Here I noticed that even for the pairing it is always advisable to first pull out the right and then the left to avoid problems.

The connection is very stable, I tried it with my Honor 9, I found only two problems on two occasions. In a first episode they disconnected from the smartphone despite being connected according to my Honor and I found a very slight audio lag during streaming movies. However the test in question was carried out on board, the Italo train that does not shine for wifi connection, I will keep you updated I will do other tests in this sense. On the screen of your smartphone you will see the PaMu charge indicator to the right of the bluetooth connection symbol, which I found very useful. In any case, do not despair when you are about to download an English voice that will announce it to you from the earphones.

Both the connection status and the charge status are indicated by tiny LEDs that change color from red to blue.

The fundamental to consider the purchase of these earphones, is very well equalized and always impeccable sound, with deep and medium bass and well balanced highs thanks to 6 mm drivers. In phone call as we said earlier, the sound is perfect while it is advisable to put both headphones to take advantage of the two microphones and the Binatural Audio Call.

The battery lasts as stated by Padmate, about three and a half hours. The powerbank case allows three complete recharges. On one of the bases is the Micro-USB and non-type C charging port, while on the other side there are four blue LEDs that indicate the status of the charge, both when it is connected to the current and when the headphones are stored inside. It should be noted that when placed in the magnetic slot, the PaMu Scrolls switch off automatically, just as they are reactivated as soon as they are extracted.

The PaMu Scrolls are available at Moldac now at the price $75, but I bought them for around $ 39 from the crowdfunding campaign on Indiegogo, and they will have a price of $ 149 final. For this reason they will be direct competitors of Apple’s Airpods. What to say, at $ 75 is a best buy honestly, but at $ 149 I could think of, maybe at that price I might not prefer these or the Airpods.